Recently I have been through somewhat of a spiritual “Wilderness Experience” which, though uncomfortable, I praise God for, as I know that he calls his people to the wilderness to protect or connect with them, (ie: Elijah by the brook Cherith, The nation of Israel after their captivity in Egypt, John the baptist, Jesus himself, the Woman of Revelation 12 and many other Biblical examples) amidst this, as I was finding it difficult to focus on my Bible I was encouraged by my Mum to get outside and look at God’s general revelation (Nature) I was amazed and encouraged by what I found.

I wandered out into the yard, and decided to inspect a tree… I know it sounds less than exciting, but stick with me here, I prayed and decided to look for christian principles in this corner of creation.

The tree I began to inspect is commonly known as a Brazilian Cherry Tree which is currently blossoming happily; 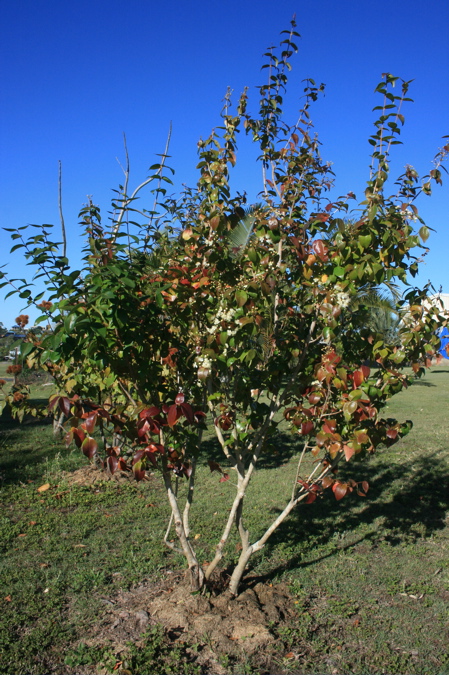 As I looked closer I noticed the blossoms were all at different stages of life, some were just starting out as buds; 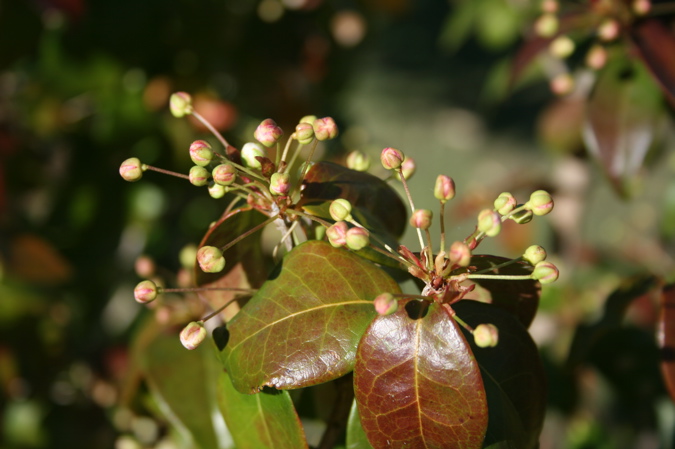 These are vitally important to the tree as a whole, without new growth, the tree would not survive, and I thought about the church, without new believers the church cannot survive either, we need growth for many reasons, but, praise God, life does not stop there, we blossom as we become mature workers in the Lords vinyard.

I could not help but think of the fullest of blossoms being like unto the luminaries or our church today, the David Asscherick’s and Doug Bachelors, the un-sung Missionaries in the field, the theologians who guard our teachings, the individuals who serve in the greatest capacity… 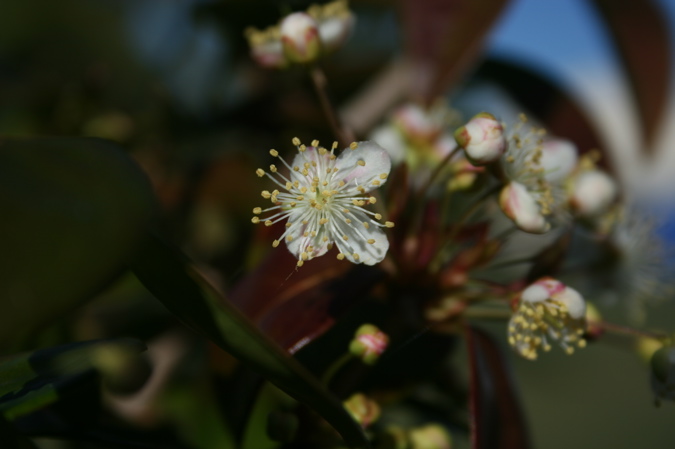 The other kind I noticed were the less than beautiful blossoms, those that had been a bud which had bloomed to their fullest then came to the end of their race… 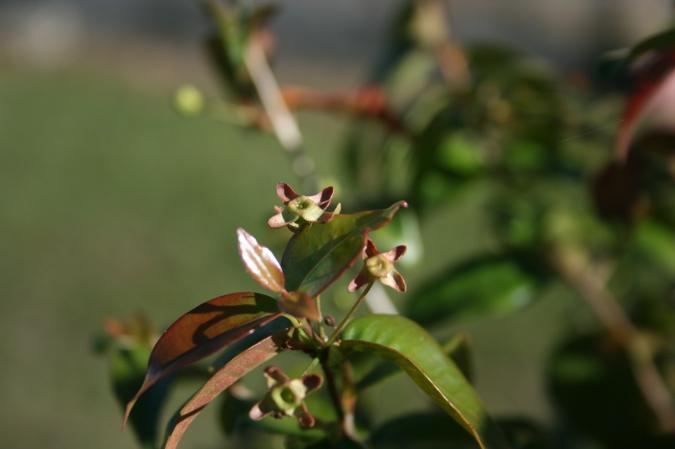 This was a timely contemplation as there is a lovely lady we are visiting who is in the autumn years of her life, her health not allowing her to serve her maker as she would love to, but she is certainly no less important than the buds, or those in full bloom, she is still a beautiful part of the family of God, her current state simply speaks of spiritual wars which have raged and temptations which have been resisted, a race which has been well run.

All these stages of growth, and every one in between are perfect, weather bud or bloom they are perfect for their stage of growth, as Jesus said “first the blade, then the head, after that the full grain in the head” it is a process, one which cannot be hurried by anything but staying connected to the life-giver. (John 15:5 says “I am the vine, you are the branches. He who abides in Me, and I in him, bears much fruit; for without Me you can do nothing.”) we should not feel jealous of those seemingly more venerable, nor should we feel pride in that we are greater than others who have not yet bloomed for we all have our own heaven directed growth-plan.

After considering this I decided to take a step back, and look at the external influences… 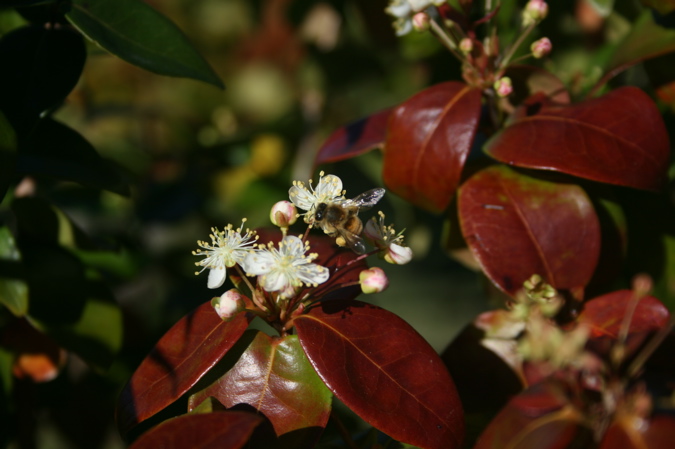 There were bees doing their work of cross pollination throughout the tree and in the mental allegory I was constructing, I thought of them as the angels which minister to the believers, sharing from one to the other doing the will of the one who sends them.

Finally I noted the a barely perceivable Spiderweb, though it did not belong in the tree, it was there set up to trap and harm wheras the tree itself is to grow and nourish with good fruit… 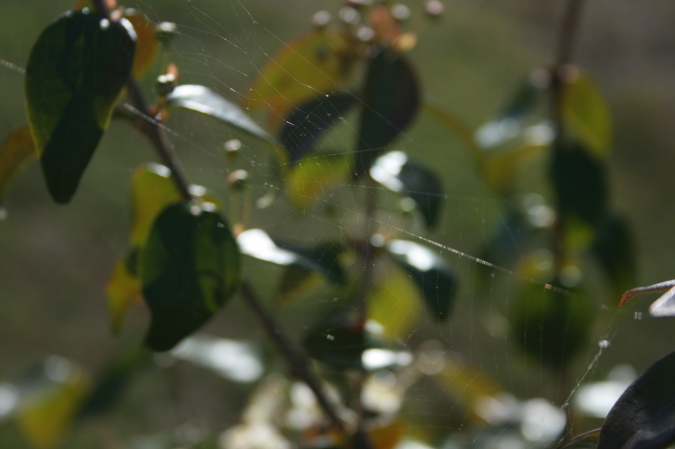 In Matthew 13:27 and 28, when the Master was asked who sowed the tares in the field he answered ‘An enemy has done this.’ God is not somehow culpable for the presence of sin and destruction, any more than this tree is responsible for the spider which has taken up residence. It is helpful to remember that though that spider may live for a season, the tree will surely outlive it and in an uninhibited way, produce good fruit, this fact, the spider, (no matter how clever) can never stop. 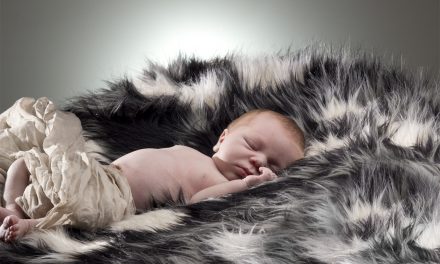 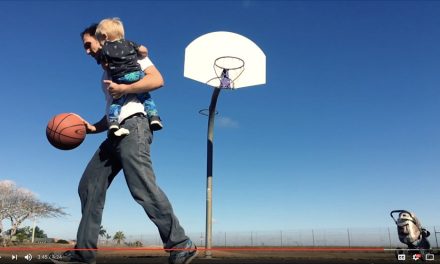 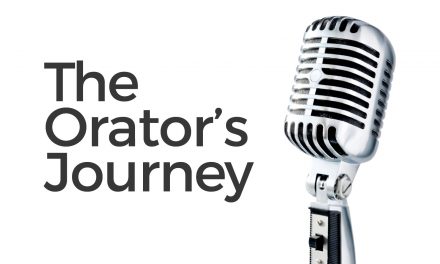