Matt Parra – Almost too great for the Greatest

This Message was a simple one, but it was indeed a challenging one.

The central figure of this message was John the baptist, the second Elijah, the one that prepared the way for Jesus and was eventually beheaded for his faith.

speaking of him in Matt 11 Jesus said:

7 As they departed, Jesus began to say to the multitudes concerning John: “What did you go out into the wilderness to see? A reed shaken by the wind? 8 But what did you go out to see? A man clothed in soft garments? Indeed, those who wear soft clothing are in kings’ houses. 9 But what did you go out to see? A prophet? Yes, I say to you, and more than a prophet. 10 For this is he of whom it is written:
‘ Behold, I send My messenger before Your face,
Who will prepare Your way before You.’[b]
11 “Assuredly, I say to you, among those born of women there has not risen one greater than John the Baptist; but he who is least in the kingdom of heaven is greater than he.

When he asked them what they went into the wilderness to see, he was questioning their motives, did they go to hear the word of God, or to condemn his messenger? We must ask ourselves this critical question when attending a conference like AYC, our motive for attending will drastically change what we get out of it.

The same could be said about life, if all you want out of life is money/house/car etc that is an attainable goal you can set but it is without eternal significance as it says in matt 16:26 “For what profit is it to a man if he gains the whole world, and loses his own soul?” to be fulfilled, like John the baptist, we must not focus on temporal things but on the eternal ones.

What was the main call of John to the people? it is a simple message and can be found in Matt3:1

1 In those days John the Baptist came preaching in the wilderness of Judea, 2 and saying, “Repent, for the kingdom of heaven is at hand!”

The message to repent is not exactly the most popular message to preach, in fact, anyone who preaches this message has a polarizing effect on society, those that see their need for a Savior fall to their knees in repentance, while those who do not perceive this need, yet feel the convicting power of the Holy Spirit, attribute the negative feelings to the human device rather than the God who is speaking through him, this is one of satan’s most effective tools to incite resistance to the Gospel.

Remember, in Proverbs 27:6 it says “Faithful are the wounds of a friend, But the kisses of an enemy are deceitful.” John understood this in a way few people grasp, while he had the influence to call the nation under his banner and lead a rebellion announcing himself as the messiah, (this was the kind of Messiah they were expecting) he instead chose to love the people MORE than what they thought of him, therefore , he prepared the way of the Lord by preaching repentance.

Everything about John was conveying his message, He wore camel hair and ate honey and locusts in stark contrast to the excessive lifestyle of his day. He was willing to remove all things from his life which could serve as a blockage or an obstacle to the message he was preaching, and as the third Elijah, we must be willing to do the same.

We must be willing to do WHATEVER it takes to accomplish our mission, we must love the people more than what they think of us, We must act in humility, we must live the message & preach it. 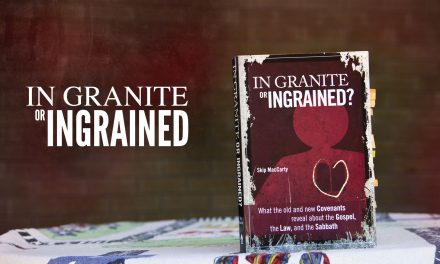 Book: In Granite or Ingrained by Skip MacCarty